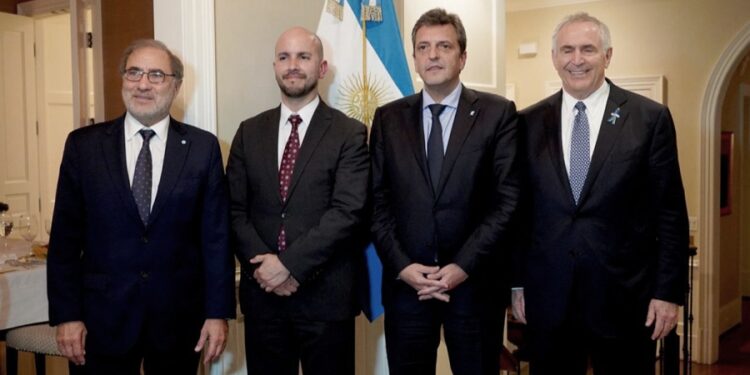 Economy Minister. Sergio Massa, unleasehd a charm ofresnive on Washington the week of September 4th, as he sought out to secure vital funds from non-goverment institutions, inmvestors and business leasders to boost Argentina’s economy.

Coinciding with Massa’ visit, a delegation of Argentine officials have been in Washington since Monday, Septmeber 4th,  to meet with the IMF technical staff to “work on the second review of the programme”, an IMF source told AFP.

Massa also sat down on September 5th with US chief of diplomacy for Latin America, Brian Nichols, and Undersecretaries of State, Ricardo Zuniga and Martin Wells, to explore geopolitical areas of mutual concern.

On September 6th, government sources confirmed that the Inter-American Development Bank (IDB/BID), has agreed a loan package with Argebtina woth some US$5 billiion over the rest of this year and next.

In total, the country expects to receive more than US$3 billion this year: US$1.2 billion to swell the dwindling international reserves of Argentina’s Central Bank (BCRA) and another US$1.93 billion in credit “programmes”, which are still pending approval and signatures, the source, speaking on condition of anonymity to the AFP news agency.

According to an IDB communiqué transmitted on the evening of September 6th, several hours after the meeting between Massa and Claver-Carone, the US$1.2 billion due this year corresponds to eight loans already apporved by the bank’s board of directors that “make an important investment in social infrastructure”.

For 2023, “techincal teams are in advanced stages of discussion to define the programme of credit operations” taht “is expected to add, at least, another US$1.8 billion”, the IDB said. In total, throughout 2022 and 2023, the amount that the IDB will lend to Argentina amounts to US$4.933 billion, according to the source in Argentina’s government.